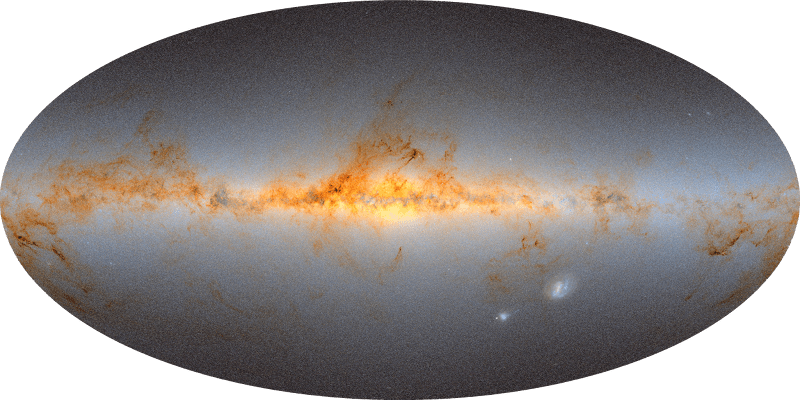 Gaia is an ambitious ESA mission to chart a three-dimensional map of our Galaxy with unprecedented precision. Gaia EDR3 is the result of 34 months of observations (July 2014 – May 2017), and contains the positions of 1.8 billion stars. This major data release includes measurements of parallaxes, proper motions and colours for nearly 1.5 billion stars !

The CDS is a partner data centre for the publication of the Gaia Early Data Release 3. The data are available in the CDS services VizieR, Aladin and the CDS catalogue cross matching service. The inclusion of these data into the CDS makes them interoperable with all of the CDS reference data including more than 20000 catalogues and hundreds of image surveys. Aladin and Aladin Lite visualisers provide an all-sky hierarchical view of the entire data set, using the capabilities of HiPS (Hierarchical Progressive Surveys) technologies developed at CDS. CDS also gives access to the EDR3 cross-id tables, giving neighbours from Gaia sources in reference catalogues. Gaia EDR3 is also made available from the CDS via Virtual Observatory protocols (IVOA Cone Search, and Table Access Protocol).

The image shows an all-sky view of the flux of the billion Gaia sources.

The CDS is a reference data centre with joint authorities of CNRS-INSU and the Université de Strasbourg. CDS is a member of Gaia DPAC CU9. This work was supported by the CNES. It is based on observations with Gaia mission.